Claire Chase to Perform and Moderate “A Conversation with Philip Glass”

Posted by Brook Center sites on August 16, 2013 in News | Comments Off on Claire Chase to Perform and Moderate “A Conversation with Philip Glass”

Claire Chase, a flute soloist, artistic collaborator, and art entrepreneur will be the moderator for “The Creative Pulse: A Conversation with Philip Glass” on October 15, 2013 at the Graduate Center’s Elebash Recital Hall.  Chase will perform one of Glass’ works for flute and continue the musical discussion by leading an audience question-and-answer session.

“the young star of the modern flute”
—The New Yorker
“as Ms. Chase fluttered, popped, swooped and sang, you felt that the instrument’s full potential had been achieved.”
— The New York Times 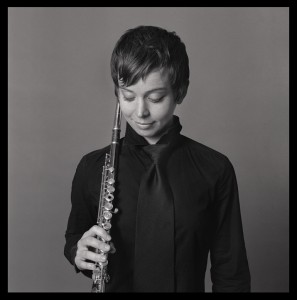 Claire Chase is a Brooklyn-based soloist, collaborative artist, and art entrepreneur, and a 2012 MacArthur Fellow.  Over the past decade as a soloist, Chase has given world-premieres of over 100 new works for flute, many composed for her.  She has performed in in diverse venues including (Le) Poisson Rouge, Miller Theatre, and Lincoln Center for the Performing Arts in New York City, the John F. Kennedy Center for the Performing Arts in Washington D.C., the Isabella Stewart Gardner Museum in Boston, the Sibelius Academy in Helsinki, the Palacio de Bellas Artes in Mexico City, and other venues throughout Europe.  Additionally, Chase is the founder and Artistic Director of the International Contemporary Ensemble (ICE), which she formed in 2001 with the goal of creating the United States’ first large-scale chamber ensemble dedicated to new and experimental music.  ICE has given more than 500 world premiere performances across the world, and has rapidly established itself as one of the leading groups of its generation as well as one of the most innovative artist-driven new nonprofit business models in the field.

The Creative Pulse: A Conversation with Philip Glass is the Fall 2013 Lloyd Old and Constance Old Lecture.