We are sad to announce that the Lloyd Old and Constance Old Lecture series will no longer be continuing. Our final lecture was Richard Taruskin, who spoke in December 2016 on “The Many Dangers of Music.”

The lecture series was founded by Constance Old in 2012, in memory of her brother, Dr. Lloyd Old, and curated by Dr. Antoni Pizà. Dr. Old was a groundbreaking researcher in cancer immunotherapy. He worked as a research physician at Memorial Sloan-Kettering, he was the Scientific Director of the Ludwig Institute for Cancer Research, and he was the Founding Director of the Scientific Advisory Council of the Cancer Research Institute. He was an amateur violinist and shared a love of classical music with his sister, who herself is a historian of music and dance iconography. END_OF_DOCUMENT_TOKEN_TO_BE_REPLACED 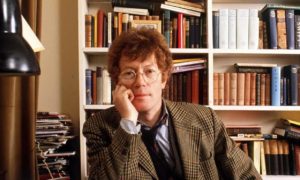 We are sorry to hear that English philosopher Sir Roger Scruton recently died at the age of 75. Scruton was the penultimate speaker of our Lloyd and Constance Old lecture series, for which he gave a talk called “Walking Among Noise,” with a response from Greil Marcus. His talk extended from his 1997 book The Aesthetics of Music, in which he explored the spatial perception of musical tones. As The Guardian writes in their obituary, “‘If someone said that, for him, there is no up and down in music, no movement, no soaring, rising, falling, no running or walking from place to place’, would we count what he is hearing as music?” END_OF_DOCUMENT_TOKEN_TO_BE_REPLACED

Good news for all who were unable to attend our sold out 2016 Lloyd Old Lecture, with Richard Taruskin and Prof. Scott Burnham! Taruskin’s thorough and provocative lecture is now online. The lecture featured musical guest Adam Kent, who performs a selection of Russian piano works.

Last year’s lecture was a great success, requiring—for the first time in the series’ history—an overflow room to accommodate audience demand. We hope you enjoy this stimulating talk as much as we did.

Last month, Billboard published its list of the top 100 music books. The list includes everything from the lyrics to Hamilton to rock stars’ autobiographies and neuroscience. We were delighted to learn that last year’s guest, Greil Marcus, had his book Mystery Train chosen for the list–and in the impressive position of #6! Billboard writes, “[M]ore than three decades on, his first [book] remains the bible of rock criticism. Ostensibly an appreciation of a handful of musical misfits (Sly Stone, Randy Newman, The Band), it ends up revealing the architecture of American culture itself.”

Marcus is a guest lecturer at the Graduate Center and delivered the response in the 2015 lecture by Roger Scruton. We were also excited to see another member of the Graduate Center faculty on the list, Mr. Eric Lott, who wrote the book on minstrelsy, Love & Theft: Blackface Minstrelsy and the American Working Class. Lott has not (yet) been a guest for Music in 21st-Century Society, but his work has been inspirational for projects with our director Antoni Pizà’s own Foundation for Iberian Music. About Love & Theft, Billboard writes, “Lott’s landmark study offers the best overview of this fascinating and disturbing cornerstone of our cultural heritage, probing the social and economic history of the minstrelsy industry while excavating the psychology behind it.”

Sunday’s edition of The New York Times included a new article by Richard Taruskin, this year’s guest at the Lloyd Old and Constance Old lecture series. The article, which is part literary book review, part contextual history of the novel’s setting, has been stimulating the kind of pointed discussion that one has come to expect in Taruskin’s wake. It concerns the recent novel by Jeremy Barnes, The Noise of Time, which features a certain Dmitry Shostakovich as its protagonist. The novel (which you can learn more about in the official NYT book review) presents Shostakovich in his oft-mythologized form as a martyr of Soviet oppression. Taruskin argues that far from being a martyr, Shostakovich was a pragmatist who navigated a difficult political climate as necessary for his own survival and was not above some mud slinging himself.

The Lloyd Old and Constance Old lecture series is dedicated to exploring issues in modern music. See Richard Taruskin, with Scott Burnham and a musical guest, December 7th at 6:30. Admission is free.

Music & Literature, a journal for modern arts, has dedicated a portion of its current issue (volume 7) to author, music critic, and librettist Paul Griffith. Paul Griffith was the guest speaker for our Spring 2013 lecture.

The issue features two extensive new interviews with Griffith and a substantial selection of his writing, nearly all of which is previously unpublished. You can purchase the issue directly from Music & Literature for only $20.

Did you miss Griffith’s lecture for Music in 21st-Century Society? Watch it here!

In further Lloyd Old and Constance Old lecture alumni news, Claire Chase, who moderated our Fall 2013 lecture with the one and only Phillip Glass, is returning to The Kitchen for two nights in December.  Chase is a MacArthur Fellow and an international force in modern flute music and performance. At her upcoming concert, she will be premiering five new works—including poems by Paul Griffith set for small choir by Richard Beaudoin. (Paul Griffith—remember him?)

You won’t want to miss this diverse and exciting program. Visit the Kitchen’s website for further details. It may seem impossible to think about December already, but tickets for these nights are likely to sell out quickly, so buy early. They go on sale August 15 at 2pm for the low price of $15.

Music in 21st-Century Society:
Richard Taruskin: The Many Dangers of Music

Wednesday, December 7
6:30 pm, Elebash Recital Hall
Richard Taruskin, America’s public musicologist, applies his broad cultural analysis, wit, and humor to 21st-century classical music. As in his acclaimed book The Danger of Music, he provokes debate, asking, what is the artist’s relationship, and obligation, to society? He is the author of the six-volume Oxford History of Western Music and a regular contributor to the New York Times. Taruskin’s talk will be followed by a discussion with GC professor Scott Burham, with a musical interlude.

Music in 21st-Century Society lectures are always free, but reservations are recommended.

The New York Review of Books recently published an engaging review of Roger Scruton’s new book, Fools, Frauds, and Firebrands: Thinkers of the New Left (Bloomsbury, 2016). The always provocative Scruton, as you will no doubt recall, was the guest speaker for the 2015 Lloyd Old and Constant Old lecture. He has written nearly fifty books, and the author of the review, Samuel Freeman, writes that Scruton is “after Richard Wollheim, the most significant British philosopher of aesthetics of the past fifty years.” Scruton’s new book is about modern schools of political thought, rather than music or architecture, but his political ideologies are never far from his aesthetics. Scruton engages what he considers to be the foundations of society, as Freeman notes, and music is a part of our foundational cultural institutions. Click the link above to read Freeman’s thoughtful criticism.

In the April 7, 2016 issue of the New York Review of Books, musicologist Robert Winter writes on the performance legacy of Charles Rosen in a review of The Complete Columbia and Epic Album Collection (new on Sony Classical). We were pleased to see that Music in 21st-Century Society (curated by Antoni Pizà) receives passing mention, in a paragraph on the sparse record of Rosen’s public appearances.

To our great honor, Charles Rosen was the inaugural guest of the Lloyd Old and Constance Old lecture series. This lecture, on April 18, 2012, was his final public appearance, before his passing in December of that year. Winter notes Rosen’s sharpness of mind, even to the end. Though his review concerns Rosen’s work and reception as a pianist, he writes, “A mind of insatiable curiosity produced one of the greatest writers about music from any era.”  It was in this capacity that he was invited to speak with Music in 21st-Century Society, and we are grateful that we were able to contribute one small piece to the archive of his impressive career.

Watch Rosen’s final lecture at Music in 21st-Century Society below: