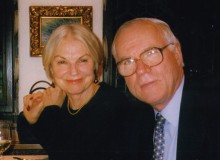 Dr. Lloyd J. Old made seminal discoveries about the relationship between cancer and the immune system, and was the founder, facilitator, and standard-bearer of modern tumor immunology.  Immunotherapy has recently taken its place alongside surgery, radiation, and chemotherapy in the armamentarium against cancer.  For many years Dr. Old was simultaneously the leader of a large laboratory at Memorial Sloan-Kettering, the Scientific Director of the Ludwig Institute for Cancer Research, and the Founding Director of the Scientific Advisory Council of the Cancer Research Institute.  The author or co-author of more than 700 papers, he was a member of the National Academy of Sciences and the winner of many scientific prizes.  Dr. Old died at his home in Manhattan in 2012 at the age of 78.  All who knew him would say his kindness equalled his brilliance

Constance Old, his sister, is a landscape designer and horticulturalist who has had a lifelong interest in the performing and visual arts and their relationship to culture. She worked for many years as a historian of music and dance iconography and established The Performing Arts Index of Music and Dance for The Metropolitan Museum of Art in conjunction with the Research Center for Music Iconography at the Graduate Center of the City University of New York. She served on the board of the Dance Perspectives Foundation, which published the International Encyclopedia of Dance (Oxford University Press), and on the board of the Isadora Duncan Dance Foundation. Her interest in dance led her to establish youth programs for the San Francisco Ballet. This lecture series allows her to carry on the  interest she shared with her brother in the role of music in contemporary society.